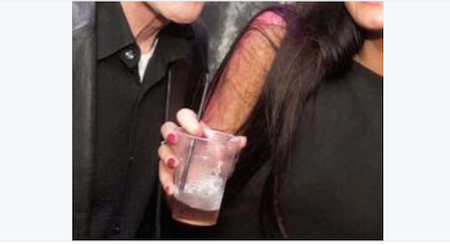 It is an X-rated version of #TheDress.  at first glance, it may seem as if these British children’s TV entertainers have been photo bombed by a gigantic penis.

The enormous member appears to be rising out of a glass held by fan Jamima Campion, whose alongside the Chuckle Brothers – Barry and Paul – in the photo.

But thankfully, it’s just an amazing optical illusion – a trick of the light converting her arm into something much more adult oriented.

The image of the comedy duo, who posted their own children slapstick style show on British TV for several decades, alongside 19-year-old Campion was taken at the Prysm Nightclub in Leeds earlier this month.

It was posted to Twitter by Solita NQ restaurant in Manchester on Wednesday, and soon went viral.

“I didn’t intend to put my arm or my hair in that position at all. The pink bit you can see on my shoulder is not my bra strap but the lighting,” Campion told The Mirror.

Initially, she was “mortified” when the image started going viral, but has since learned to take it as a joke. She also vowed to be more careful when posing with celebrities in the future. 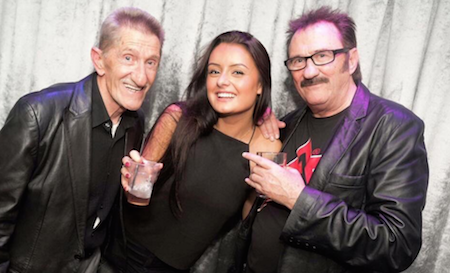