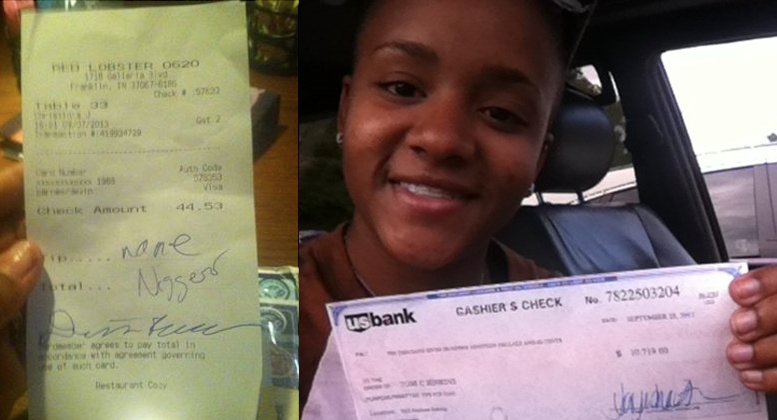 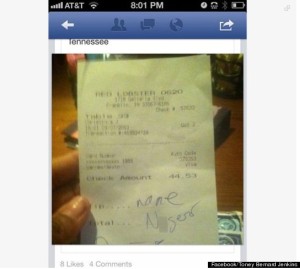 Racism At Red Lobster Pays Off. A Red Lobster in Tennessee is being sued by a man for $1 million. He is alleging that a racist receipt was posted by one of their employees and went viral, slandering his name. The man, Devin Barnes and his wife went to this Red Lobster on September 7, 2013. They had placed a to-go order with the server, 19-year-old Toni Christina Jenkins. After paying their ticket Barnes wrote “none” on the tip line. A few days later Jenkins had posted a picture of the same receipt on Facebook, only this time the receipt read “none n**ger” in the tip line. The picture soon went viral.

Along with the Facebook post the caption read, “This is what I got as a tip last night. So happy to live in the proud southern states… God Bless America, land of the free and home of the low class racists of Tennessee.” One of the major problems with this is that the receipt had Barnes’ full name and information on it. He denies writing the slur on the receipt and told ABC News 2, “A lot of people on the Internet who I don’t know are calling me a racist… but I know I am not a racist. I don’t see color. I have many mixed-color friends.” In a copy of the lawsuit it alleges a willful and malicious act, slander and unlawful release of Barnes’ personal information on the Internet. Barnes’ is suing Jenkins as well as Red Lobster, although Red Lobster has not been served the lawsuit yet. Barnes and his attorney, Richard Dugger have hired a forensic handwriting expert to analyze the receipt, and the expert concluded that Barnes nor his wife had wrote the slur. Jenkins also claims that she didn’t either. 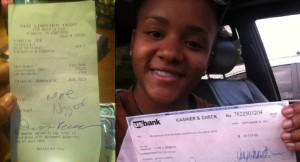 Jenkins was suspended from work for violation of company policy, but has since returned to work. She had removed the photo from Facebook but it has still found it’s way around the Internet. When the photo was first posted many people on Reddit believed that she had forged the receipt, but many others actually felt so sorry for her that they made a tip fund for Jenkins that raised over $10,000. Now if she was the one that initially wrote the slur than it is very wrong for her to take the money, but I guess the truth will come out in the end. This is what Red Lobster had to say, “After the completion of a full investigation into this matter, Miss Jenkins returned to work. As we shared before, we were disgusted by the language used on this guest check as it has no place in our restaurant or anywhere else.”