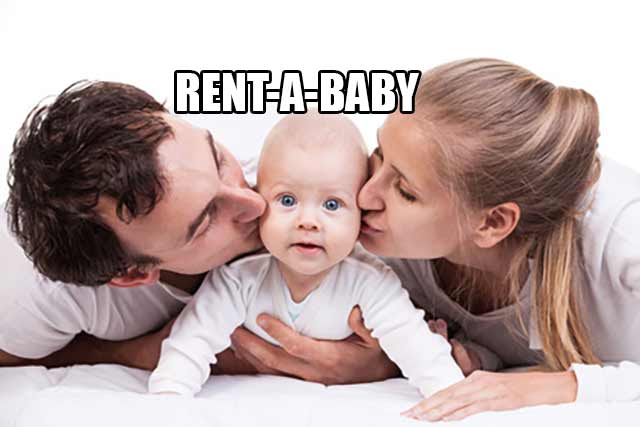 A new government funded program allows couples to “rent” babies before deciding whether to have a child of their own. The newborns are taken from publicly funded homes for unwed mothers shortly after birth and placed into the homes of married adults.

Here’s how it works: For $5000, couples get to rent a baby for up to eight weeks. The couple can renew the lease or the baby is returned and sent to another couple for the same length of time. Most babies will live with six different couples during their first year, at which time they can be put up for permanent adoption. The $5000 rental fee goes to the unwed mothers’ homes.

“There are thousands of young, double income couples who are undecided about what they want to do with their lives,” says Dr. Audrey Hollings, a psychologist who helped pioneer the program, known as the Parental Skills Training Project (PSTP). “PSTP offers couples (straight or gay) an opportunity to see, firsthand, what caring for a baby involves and it allows them to make an informed choice. Another plus is that it supports badly needed homes that are for unwed mothers who would otherwise have no place to go.”

Single women who can prove they are financially solvent, can also rent a baby. “It works great because you can take the baby during the week and give it back on the weekends when you want to go out with your friends,” said Mindy Walton of Chicago.

“PSTP has its critics, and I’m one of them,” said child psychologist Dr. Thomas Westmore. “PSTP is not accepted by everyone who cares about children. It’s placing money over the welfare of our nation’s kids. No child should be in the home of a couple who is not 100% sure they want one. And it is disgraceful to simply rent a baby to anyone who can afford the price. Babies are highly impressionable in those early months. They form a mental imprint and believe these people are their parents. To tear them away as often as six times in one year is nothing short of abuse.”

But Dr. Hollings and her fellow supporters of PSTP say it’s better than putting the babies in orphanages or foster care while they’re waiting to be adopted. In just one month since its inception, PSTP has generated more than $1 million and childcare professionals in Australia, Great Britain, and Canada are looking to adopt the program.

What do you think? Is Rent-A-Baby a good idea or not?