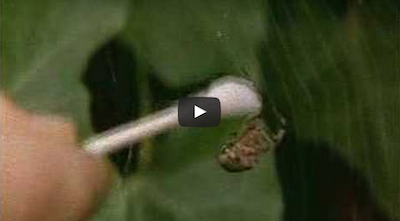 In 1948 the German zoologist H.M. Peters was studying spiders and faced a problem. The spiders weaved their nest between 2 AM and 5 AM in the morning. He questioned a friend Dr. Peter Witt, a German born Swiss pharmacologist, what they could do to get the spider to weave webs during feasible day times.

According to Rainer Foelix, in his book “Biology of Spiders,” Dr. Witt prescribed amphetamine. Unfortunately or fortunately that didn’t work. The spiders continue to build in those early morning hours although, drugged spiders webs were amazingly different as compared to sober spiders.

Finding the outcome of the experiment very interesting, Dr. Witt performed more experiments on the spiders with other drugs like LSD, mescaline, and caffeine. The forms of webs depended on which substance they were given.

Here’s a humorous take on the drug spider experiment below!