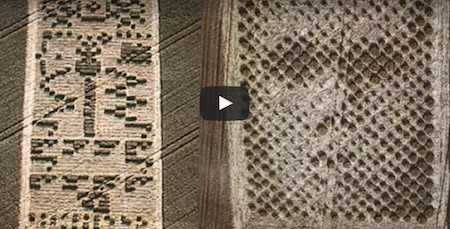 After 27 years, we may have actually made contact with aliens.

In 1974, the Arecibo Radio Telescope received a major technological overhaul resulting in a massive boost in transmission power.

To celebrate the upgrade, Doctors Frank Drake and Carl Sagan created an interstellar greeting message, and translated it into a universally understandable binary code template capable of being transmitted to distant galaxies.

The message is easily rendered into an infographic of humanity. It starts with the basic binary count from 1 to 10, which serves as a built-in decryption key to translate the message into a graphic form.

Then it lists the atomic numbers for the most basic chemical elements that make up DNA, and describes the building blocks of DNA by giving the specific nucleotide formulas and showing the double helix DNA structure of every living thing on earth.

A measuring bar beside a human form indicates the average height of humanity to be about 5 foot nine, and the Earth’s population to be approximately 4 billion. Then it shows the Earth’s position as the third planet in our solar system, with a diagram of the Arecibo Radio Telescope message transmitter, and its size.

27 years later, we received a reply……