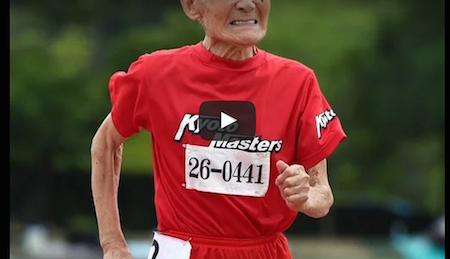 This man is a boss. Hidekichi Miyazaki Started taking up running as a 90-year-old. He is the prime example that age seriously does not matter, if you persist, you can do it! Doctors have described him as a medical miracle, and we can see why. He has become the world’s oldest competitive sprinter, and he just broke his own 100 m record.

His final time was 44.22, but for this man, that time wasn’t good enough. “I wanted to shave off a few more seconds, as I ran it in 36 seconds during training,” Miyazaki told reporters after the competition in Kyoto.’s nickname is The Golden Bolt, respectively named after Usain Bolt, one of the fastest men of all time.

He says his secrets of longevity were in daily exercise and eating only in moderation. “The doctors are all surprised. It’s all about being in good health,” said Miyazaki, who just celebrated his 105th birthday the day before the race. “The doctors gave me a medical examination a couple of days ago and I’m fit as a fiddle. My brain might not be the sharpest but physically I’m tip-top. I’ve never had any health problems. Doctors are amazed by me. I can definitely keep on running for another two or three years.”