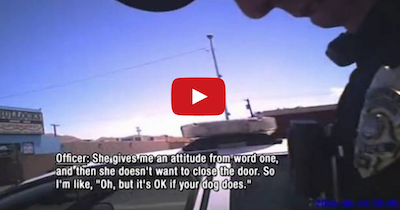 See Why This Cop Asked A Woman To Sit In A 114° Hot Car, The Reason Will Appall You!

A woman in Ohio decided to leave her dog in a life-threatening situation.

It was a hot 90° day, and she decided to go into Walmart and leave her dog locked in the car with no ventilation. The temperature in the car reached well over 114°.

When she returned to find police at her car, she said the dog was fine and seemed to lack any type of remorse.

To teach the woman a lesson, the officer asked her to sit in the car with the windows up and doors closed to see how it felt.

While the officer wrote her a ticket, she was laughing, not taking the incident seriously.

The officer, who was disturbed by her attitude, said, “If it was okay for the dog to be in there, you should sit in there as well.”

The woman reported that the officer was being verbally abusive to her. However, his lapel camera footage showed otherwise.

Do you think the officer was going too far by asking her to have the same experience she put her dog in?

Check out the video below, SHARE, and let others know what you think!