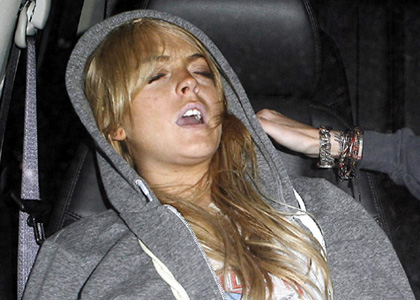 Following a conviction for drunk driving in 2010, Lohan was sentenced to 125 hours of community service.

With over 115 hours left to serve before the end of May, critics question whether the ex-Drama Queen can avoid jail time.  But, Lilo has a plan.

Paparazzi found a handwritten note from Lindsay outlining how she expects complete her service in time.

Lohan is known for dabbling in various religions.  Most recently, pictures emerged with her carrying the Quran.  But, Lilo has her religions mixed as she plans to pray to Zeus for peace.

In 2009, Lilo selflessly rescued more than 40 children all by herself from a sweatshop in India.  Hoping to recapture the good press, Lohan will stage a raid at a NYC daycare where she observed toddlers forced to make crafts.

Lilo knows how it feels to lose important possessions.  Partnering with the police, Lindsay hopes to recover other objects she lost while inebriated.

Nothing uplifts the community more than inspiration tweeted in other languages.  As a master linguist, Lilo will spend several hours mistranslating phrases like “You are beautiful in every single way” into “You are burger in Teflon streets.”

The more time Lilo spends in clubs, the more she is off the streets.  Lilo on the street = bad.

If all else fails, Lohan hopes to convince the judge that the girl arrested by the police in 2010 was someone else named Lindsay.

However, due to Lohan’s popularity, everyone assumed it was the movie star.