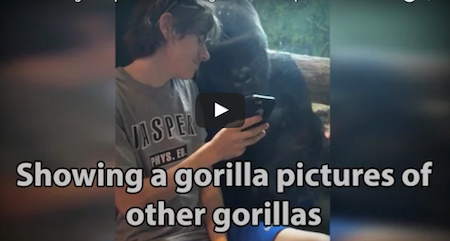 A gorilla named Jelani, that is housed in a habitat at the Louisville Zoo, was shown photos of other gorillas by a young man on his cell phone.

Jelani is a Western Lowland Guerrilla, a species classified as “critically endangered” by IUCN.

Watch as he becomes mesmerized with the sight of other gorillas on the cell phone.

It is truly amazing!