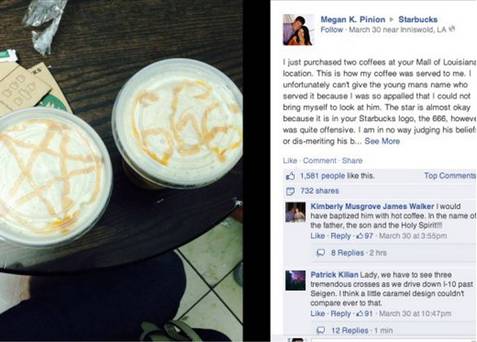 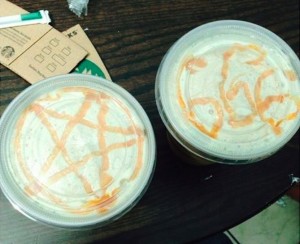 “The star is almost okay because it it is your Starbucks logo, the 666 however was quite offensive. I am in no way judging his beliefs or just meriting his beautiful artwork, I am however judging his lack of professionalism and respect for others.” She added, “I am a teacher in the public school system and if I were to present a child of atheists or pagan believers with a Christian art project I could be sued in a heartbeat.” She continued, “I am of Catholic faith and would love to share my beliefs daily. Fortunately I have enough common sense to present myself with professionalism and follow the code of ethics. Perhaps that could be suggested to that particular location.”

The number 666 is often associated with the antichrist and is used to invoke the devil in Satanic rituals. The inverted five-point star is sometimes known as the seal of Satan. A spokesperson for Starbucks said the coffee giant apologizes to Mr. Pinion after seeing her post on Facebook and is investigating the issue. The Starbucks barista who served the Satanic drinks has not yet been identified. 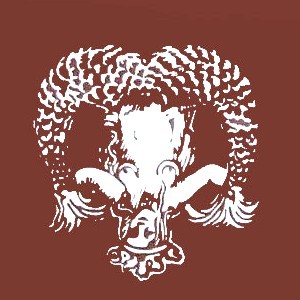 I guess we all accept the apology from Starbucks even though if you turn the Starbucks logo upside down it looks like Satan devouring a female!