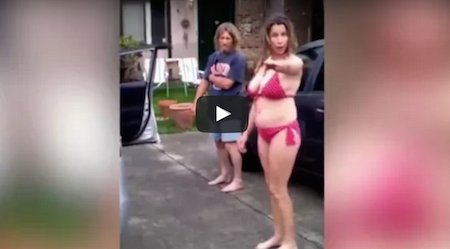 This is the shocking moment a woman launches a racist tirade on her neighbors, telling them they should have “stayed in Africa.”

The incident was caught on camera by one of the victims of the verbal onslaught, which took place on a residential street in Tallahassee, Florida.

The video, which was posted on YouTube, shows the bikini-clad woman becoming increasingly angry while arguing with the group outside her house.

Her daughter urges her to stop and pulls her back hoping to calm down the incident. Check out the video below!