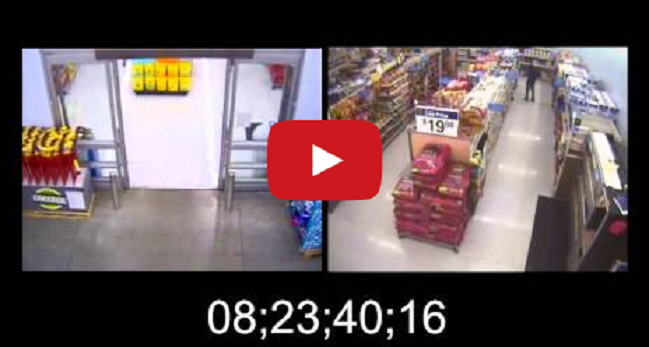 A 22-year-old Ohio man, John Crawford, was shot and killed in a local Walmart after grabbing a toy pellet rifle from the shelf. The video shows the victim inside the store, as he stands at the corner of an aisle.

He is seen putting the gun on his shoulder and swinging it around. He then flies forward, and the pellet gun leaves his hands. It was obviously at that point he was shot by the police. You can then see the police running down the aisle towards Crawford.

According to Ohio police, Crawford ignored the orders to put the pellet gun down.

After the trial, the grand jury decided not to indict anyone involved on the charges which included murder, reckless homicide, and negligent homicide. Special prosecutor Mark Piemeier said they determined the officers were “justified in their actions.”

Although Crawford’s family had pushed for this video to be released weeks earlier, the state Atty. Gen. denied the request. They feared that an early release might influence the jury pool.

Crawford’s family issued a statement after the jury’s decision saying, “The Walmart surveillance video and eyewitnesses proved that the killing of John H Crawford III, was not justified and was not reasonable. It is undisputed that John Crawford III was in Walmart as a customer and was not posing a threat to anyone in the store, especially the police officers. The undisputed evidence also shows that officer Sean Williams shot and killed Mr. Crawford while his back was turned and without adequate warning. Needless to say, there was definitely sufficient evidence and probable cause to move forward with criminal charges.”

Department of Justice officials said they would “conduct a thorough and independent review of the evidence and take appropriate action if the evidence indicates a prosecutable violation of federal criminal civil rights statutes.”

You can see the newly released surveillance video below: