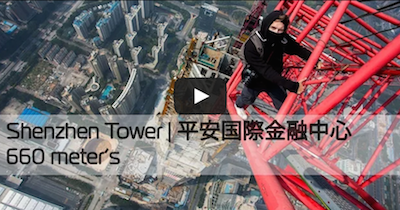 They Free Climbed The Second Tallest Tower In The World, OMG! I’m So Nervous!

It was more than a year ago when the YouTube channel ‘On the Roofs’ climbed the Shanghai Tower.

The response was overwhelming.

“That amount of feedback let us to the idea of making a tradition of roof topping new skyscrapers all around the world,” they said on their YouTube channel.

And so they did!

The video below shows their new hero of attention, a new financial center that is still under construction in Shenzhen, China.

Right now the height of this building is nearly 2000 feet tall which makes it the second tallest tower in the world!