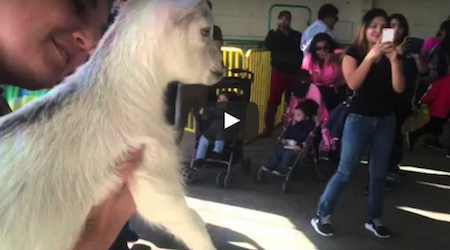 Staff at the Great American Petting Zoo were heartbroken when a three-week-old baby goat named GusGus was stolen from his pen.

But not nearly as heartbroken as GusGus’ worried mother, who didn’t sleep at all while her little one was missing.

Much to everyone’s relief, the baby goat was found the day after in a ditch by the side of the road. Apparently having been dumped there by some heartless person.

Watch the joyful reunion in the video below when GusGus was returned to his distressed mother!