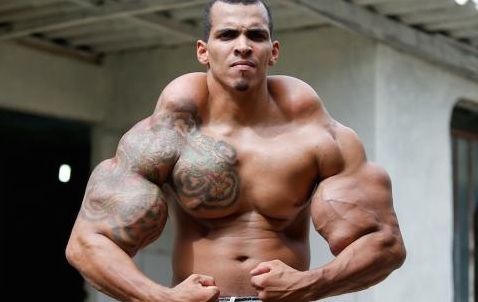 This Guy Almost Had To Have His Arms Amputated After Inspiring To Be A Real-Life Hulk.

Having that bodybuilder look is important to some men, so much that they will go to extreme lengths to have it.

Dedication, determination and perseverance is what it takes to reach that goal.

However, when you cheat with muscle injections, it can cause a dire consequences.

That’s what happened to Romario dos Santos Alves, a 25-year-old from Brazil, who started injecting his muscles with a mixture of oil and alcohol three years ago in an attempt to build up his physique.

It became an addiction he could not stop, leaving him with 25 inch biceps.

Soon after, he ended up in the hospital facing the fact that his arms might have to be amputated because he had necrotic tissue, caused by bacteria infecting the tissue and eating away at itself.

In addition to that, his kidneys were heavily damaged from toxins in the injections.

“I remember the Dr. told me that they would need to amputate both arms,” he said. “They said everything in there, all my muscles, were rock. It was either that or cut all of my muscles out.”

What Alves injected himself with was a cocktail known as “synthol,” which is a mixture of oil, the anesthetic lidocaine as a painkiller and alcohol as a sterilizer.

Don’t cheat! Work hard for what you want.