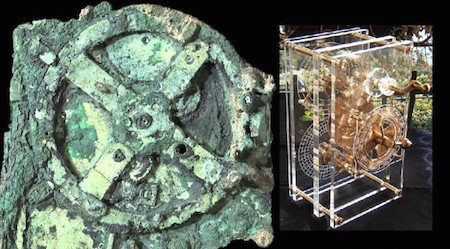 This Mysterious Ancient Greek Analog Computer Was Built Over 2,000 Years Ago!

Under 45 m of water, just off the Greek island of Antikythera is an ancient Greek shipwreck, discovered within the sunken ship was the Antikythera Mechanism. A mechanism that is thought to have been used to calculate astronomical positions. However, this ancient calculator is very significant due to the fact that it’s as complex as an 18th-century top-notch clock, it was built between 150 to 100 B.C.E.

It’s an ancient analog computer that consists of a box with dials on the outside and a very complex assembly of about 30 bronze gear wheels mounted inside. Nothing similar to this has ever been discovered or is mentioned in any known writings from the period of its creation. The reason that this mechanism is so mysterious is that it can predict astronomical positions and eclipses for calendrical and astrological purposes, as well as the cycles of Olympic Games.

It was built with extreme precision and care, and after the knowledge of this technology was lost at some point in antiquity, the technological artifacts approaching next complexity and workmanship did not appear again in Europe until the development of mechanical astronomical clocks in the 14th century.