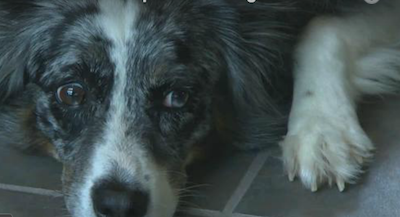 This Soldier’s Dog Bit A Cop In The Leg – Now Watch The Cop’s Reaction!

There have been several reports over the years of police officers shooting dogs that are just trying to protect their property.

So when Geoffrey, who was home with his  4 year-old son, called 911 to report a neighborhood disturbance, he told the dispatcher that his dog Jillaroo was also home.

Jillaroo Is an Australian Shepherd who helped protect the home while Geoffrey served two tours overseas. So when officers arrived, Geoffrey attempted to secure the dog in the back room. However, when Geoffrey’s son ran to open the door for the officer, the dog jump between the child and the officer biting the cop in the leg.

But instead of acting aggressively towards Jillaroo, officer Frederick attempted to soothe the dog – much to Geoffrey’s surprise.

Ofc. Frederick is being commended by the police department for remaining calm, rather than acting with haste and violence. You can check out his story in the video below!