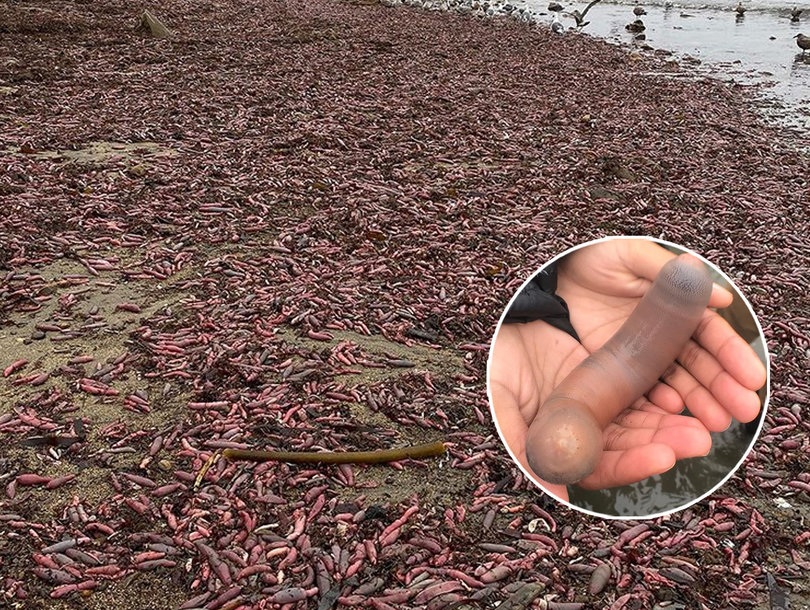 It’s not even a nudist beach.

Thousands of 10-inch “penis fish” have washed up on the Californian shore.

Pictures from Drake Beach had the internet blushing this week when a carpet of the pink, wriggling phallic organisms were sent, unsolicited, by the Pacific Ocean. Urechis caupo, also known as the “fat innkeeper worm”, has a second, less flattering nickname thanks to its uncanny resemblance to a certain male appendage.

The images were shared by Bay Nature, which even in its expansive experience on the natural world, admitted it was “SHOOK”.

“These phallic organisms are quite common along the West coast of North America, but they spend their whole lives in U-shaped burrows under the sand, so few beachgoers are aware of their existence.”

The publication claimed that a recent storm in Northern California brought strong waves that washed away several feet of sand from the intertidal zone, leaving all the worms exposed on the surface.

“Next time you go to the beach, just think about the hundreds of 10-inch, pink sausages wiggling around just a few feet under the sand,” it advised. To find a buried one, beach-goers should look for a little sand chimney that marks the entrance to its burrow, while a nearby pile of worm droppings will mark the back door.

Bay Nature goes on to describe how the penis fish feeds, slipping and sliding in and out of the tunnel, before it “exudes a sticky mucous net”, then “slurps it all back into its mouth.”

The publication called on the public to report any mass strandings, taking note of the location and number of worms.

The photos quickly went viral online, with stars including Nicole Byer and Gus Kenworthy cracking jokes about the worms on social media. “I guess I’m going to the beach,” wrote Byer.

Wrestler Joey Ryan added, “How many times would you guess I’ve been tagged in that ‘penis fish’ story?” and Andy Richter cracked, “I’m not going to say how I know, but let’s just say that the penis fish could also be known as the Donny Osmond fish.”