Toddler Takes Jeep For A Joyride. So I’m sure you’ve heard stories of kids taking their parent’s cars for joyrides, but usually their at least old enough to not being wearing diapers. In Myrtle Creek, Oregon, police say a toddler crashed his aunts Jeep into a home and then ran back to his house to watch cartoons.

The 3-year-old-boy, who was wearing only a diaper, climbed into the Jeep Tuesday and knocked the car out of gear. This caused the car to roll down the street, through and intersection, and then into a house causing minor damage, according to witnesses. An officer had allegedly seen the boy in the vehicle and was wondering where his parents were. After he ran back to the house the officer knew where to look.

The mother was in the bathroom at the time with another relative sleeping in the house. I’m sure that was quite a surprise to come out to. The mother Brennan Pennington, 22, was cited for failing to 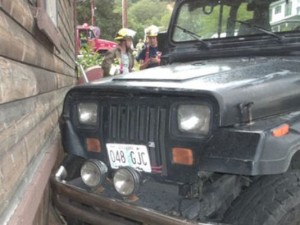 supervise a child. It’s just a good thing that no one was hurt.