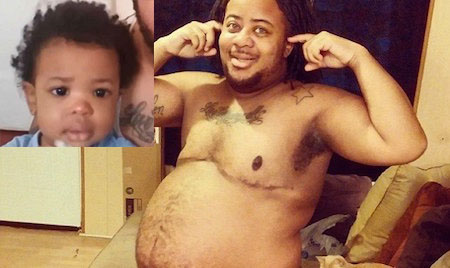 Kayden Coleman thought he was just out of shape when he began putting on weight.

Coleman had been transitioning for the past decade and was about to get a double mastectomy, so he had to go off his hormone injections for several weeks in preparation for the procedure.

But then one day, he began to experience back pain and asked his then boyfriend, Elijah, to give him a back massage.

“It felt like there was a pillow under my stomach but there was no pillow,” Coleman said. Then he joked that they should take a pregnancy test, but the result turn into no joke: he was really pregnant!

While Coleman and Elijah were excited about the pregnancy and began to prepare for their apartment and got married, the pregnancy meant that Coleman had to come out to Elijah’s family as transgender, which he had not done before.

“It was such a personal thing that I felt if Kayden wanted them to know he should tell them himself,” said Elijah. “But when we found out Kayden was pregnant we knew we had to tell them. How could we explain the baby when she popped up after a couple months?”

Since his daughter has been born, Coleman has absolutely fallen in love with her. “I could not imagine, and don’t want to imagine, life without her. She is amazing,” he said.

You can check out their discussion in the video below!