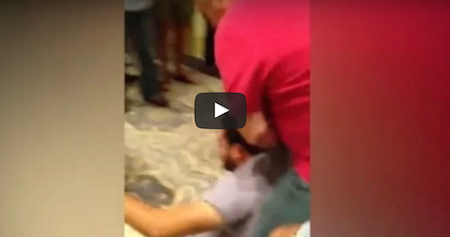 Donald Trump seems to be saying some outrageous things. Does he know he’s being divisive? It turns out he does, and his supporters seem to be getting the message.

Pro-immigration protesters and Donald Trump supporters clashed at a rally in Miami, leading to one protester being forcefully dragged out by his collar to chants of “USA! USA!”

Ariel Rojas, one of eight student protesters from Florida international University, was seen on video being forcefully dragged to the ground by his collar and then kicked as rally goers cheered.

Trumpet acknowledge the protesters several times during his hour-long speech. At one point, he encouraged people to remove the protesters and noted, “You can get ’em out, but don’t hurt ’em.”