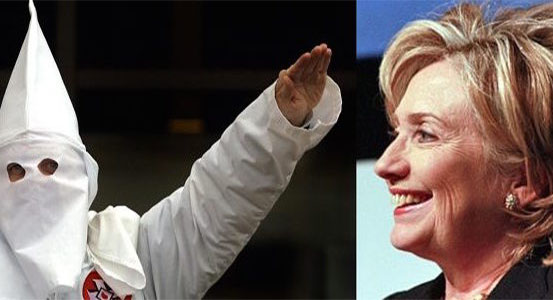 As super Tuesday began, conservative business man Donald Trump has been under fire for not disavowing David Duke, the former Grand Wizard of the Ku Klux Klan.

Former US Sen. Robert Byrd (D-WV) was a card-carrying member and recruiter for the KKK. In the 1940s, he obtained the KKK rank of “Exalted Cyclops” and spent decades promoting their vile, racist message. And he took part in what was, at the time, the longest filibuster ever against the civil rights act.

As Byrd once announced: “I shall never fight in the Armed Forces with a Negro by my side. Rather I should die 1000 times, and see Old Glory trampled in the dirt never to rise again, than to see this beloved land of ours become degraded by race mongrels, a throwback to the blackest specimen from the wilds.”

Watch this video below where Hillary Clinton remembers her friend and former Klansman, Sen. Robert Byrd: