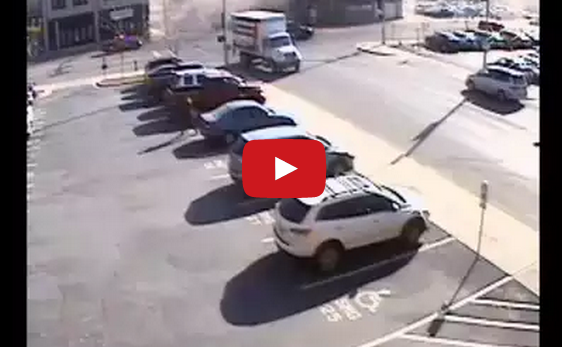 A woman is in custody after authorities said she fled from police in a stolen vehicle and crashed into a downtown building, causing part of it to collapse.

The woman was able to get out of the car after she wrecked around 10:30 AM on Thursday near the intersection of East 18th and Oaks Street. She was transported to the area hospital for treatment of her injuries, she is expected to be okay. Charges are pending.

“As fast as she was going, as fast as they were chasing her, I knew something was going to happen,” said Cynthia Bell who witnessed the end of the chase and the aftermath. “It was like a bomb. It was like boom,boom! If it could have shook the ground, it would have.”

Police estimate that the woman drove as fast as 80 mph at times. The woman speed is why police tried to stop her, Capt. Chris Sicoli said.

“That fast, without any regard for red lights or stop lights or stop signs, we have a lot of blind intersections in the city,” the captain said. “Anybody could have been hit at any time coming through those intersections. That’s why the pursuit was authorized.”

As soon as the woman hit the building, it immediately collapsed. Check it out in the video below. It is unbelievable!