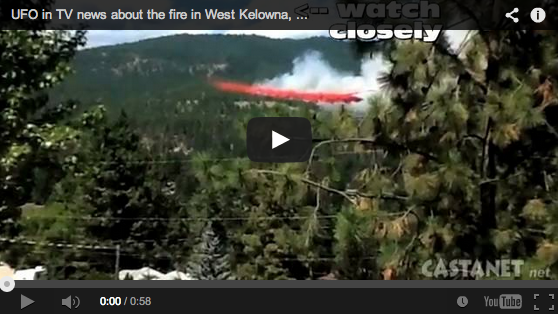 UFO Caught On Camera By News Crew Reporting On A WildFire. This video that was shot outside of Vancouver, British Columbia, is supposed to be a news report on a forest fire and the firefighting efforts. However, it seems that the news crew captured a lot more than just the firefighting. They may have spotted a UFO.

Castanet.net is a news organization in Western Canada and on July 17 they posted this video that was shot in West Kelowna, which is northeast of Vancouver. In the video you can see a mysterious object jet across the screen at about 26 seconds in. Here is what Castanet had to say about it, “In the news piece, a bright object appears from behind clouds above the fire area quickly moving left to right.” The news site was not quick to say that it was an actual UFO and actually Marc Dantonio, who is a chief photo and video analyst for the Mutual UFO Network believes it may not be a UFO at all.

“I am convinced that this was a really good find,” Dantonio said. “It is an Earth-grazer, a meteor that approaches the atmosphere at a shallow angle, and continues on, skipping off the atmosphere back into space. Some of them will slow down enough to become trapped and fall to Earth but they many times just skip on off and keep going. This one does indeed show a vapor trail as it moves through, it does come out from behind the cloud, and it moves at a speed completely consistent with Earth-grazers.”

As disappointing as this may be don’t count the video out entirely yet. There is still another strange object occurring around the 32-second mark and this one looks quite convincing. It happens at a 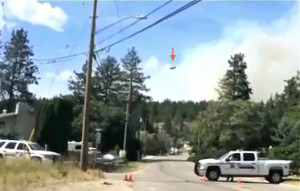 blink of an eye so you may not be able to see it. Here is a screen shot of the craft. CLICK HERE —> TO LIKE DAILY BUZZ LIVE ON FACEBOOK! Also check out the video for yourself below: