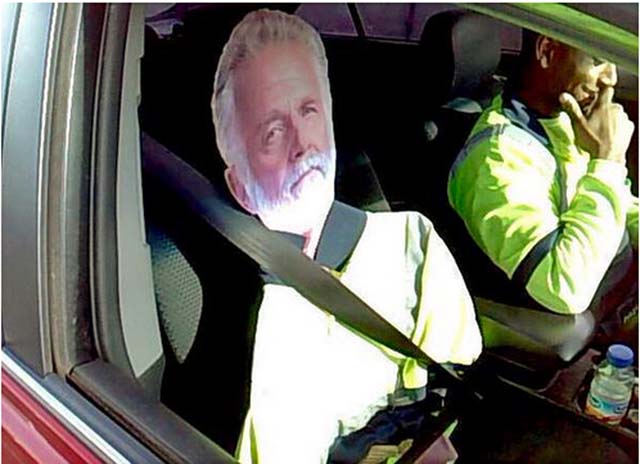 Wait Till You See The Cardboard Figure This Guy Used To Drive In The Carpool Lane! #FAIL

(AP) A Washington State patrol trooper says it’s by far the best carpool scam he has seen, but it did not work.

“Troopers don’t always stop people in the HOV lanes, but when they do, they prefer ‘dos’ passengers.”

A motorcycle trooper parked along Interstate 5 near Tacoma on Monday afternoon, spotted a driver and a rather unusual “passenger” pass by him in the carpool lane.

When the trooper stopped the car, he discovered that the “passenger” was a cardboard cutout of the actor who portrays “The Most Interesting Man in the World” in the Dos Equis beer ads.

The most interesting man was not confiscated, but the driver was told not to use him again.

Channeling the cardboard cutout, the state patrol tweeted: “I don’t always violate the HOV law, but when I do, I get $124 ticket.”