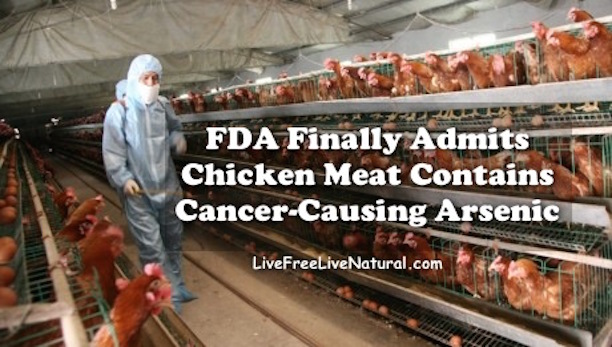 I’ve always insisted that the term “FDA Approved” doesn’t really hold much weight. Now, unfortunately, that rings true as we learn the FDA finally admitted that nearly 70% of chickens sold in the United States contain arsenic.

With cancer and other diseases on the rise, this should really come as no shock that the main link to cancer would come directly from our food that the government approves “safe” for us to eat.

This cancer-causing toxic chemical, that in high doses could kill you, is actually being added to chicken feed on purpose, giving store-bought chicken the illusion of healthy coloring and plump appearance.

According to MSN.com, the FDA has asked Pfizer to stop manufacturing the arsenic containing drug, Roxarsone, that was found in the livers of nearly half of all chickens tested.

According to the Wall Street Journal, “The agency said it recently conducted a study of 100 broiler chickens that detected inorganic arsenic at higher levels in the livers of chickens treated with 3-Nitro compared with untreated chickens. Pfizer said the sale of 3-Nitro would be stopped immediately by early July in order to allow animal producers to transition to other treatments.”

This urgent request by the FDA is surprising in itself as the agency has always maintained that the arsenic in chickens is at such low levels that it is safe for consumption, when meanwhile it has been clinically proven to be extremely toxic to human health, causing an array of neurological defects in developing fetuses and young children.

There are signs you can look for when buying chicken.