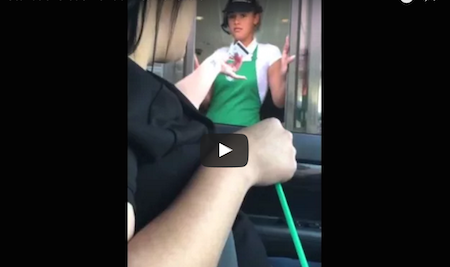 A California Starbucks cashier got caught red-handed stealing a customer’s credit card information, and faced the wrath of her furious dictum.

Juana Martinez unloaded on the Starbucks worker in Lakewood who was stunned and admitted to the crime after being confronted by the theft victim.

The 2-minute 30-second clip has since gone viral, a penalty worse than arrest for the 19-year-old coffee shop employee. “I think this is a worse punishment, honestly,” Martinez told the daily news. “I think it’s more than enough that she is all over the Internet. people will know who she is.”

In the clip, the teen cashier identified as “Chanel” greets the customer and hands her a drink with a smile, which quickly turned into a frightful grimace once Martinez called her out for swiping her credit card digits. You can check out the entire confrontation in the video below.