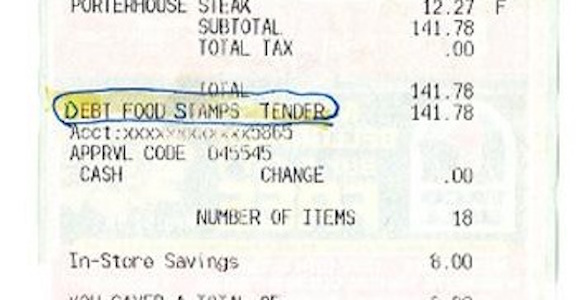 Look at this grocery receipt and read it carefully. Does what you see bother you? This receipt was found on the ground in the parking lot of Angeli’s Country Market in Menominee, Michigan.

This receipt shows $141.78 worth of food purchased on a food stamp card. This purchase includes six lobsters, two porterhouse steaks, and six 24 packs of Mountain Dew soda with the entire bill covered by government assistance.

As it turns out, the receipt is genuine. However, regardless of how upset it might make most people who work hard and pay taxes, it does not violate any existing laws or rules. The fact is, if you do not work you can eat better than most people in the United States.

But before you think this shopping spree went unnoticed, you should know the purchaser (who had used his girlfriends EBT card) did not get off Scott free. He Was Arrested! He was not arrested for making disallowed purchases with food stamps, but for turning around and reselling the food he had bought with the stamps to someone else for 50% of their original retail price.

Lewis Wayne Cuff, a 33-year-old Michigan man, was arraigned for food stamp trafficking, a felony. Cuff’s arrest resulted from a month-long joint investigation by the State Department of Human Services Office of Inspector General and the Menominee County Sheriff’s Department. Cuff, who allegedly used a food stamp card to buy the groceries and then sold them for $.50 on the dollar, faces up to five years in prison and a $10,000 fine. He is free on a $5000 bond.