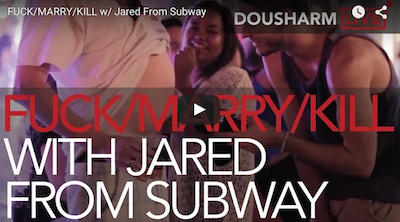 20-year-old Joseph Dousharm and his trusty sidekick/camera woman Janelle McCarthy (which combined create DousharmLIVE) decided to hit the streets of Las Vegas and ask people what they think about Jared from Subway.

The people on the Las Vegas strip also opted in for a game of F*ck/Marry/Kill, having to choose between Jared from Subway, Hillary Clinton and Caitlyn Jenner. Which would you f*ck, which would you marry, and which would you kill? Share this video and let your friends know YOUR answer!

DousharmLIVE is hitting the streets of Las Vegas with the real hard hitting questions that no one else is asking and the answers might just surprise you. You can follow Joseph at Twitter.com/Dousharm