You might think twice about biting onto a candy bar once you hear this mothers story. With Halloween just around the corner, it’s also a reminder on checking your children’s candy before they eat it.

A Kansas mother is terrified after buying her son a pumpkin Reese’s at a local grocery store that contained a needle inside. Luckily, she took the first bite, not her young son.

“Luckily it didn’t stab me in the mouth. I caught it with my teeth,” said the mom Tamara Powell. 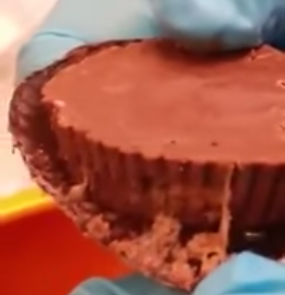 The family is not filing a lawsuit against the company, but they are making sure the batch of candy is removed from the store where it was purchased.

The police said if they find out who put the needle in the candy, they will file assault charges. They are currently reviewing the store surveillance cameras.

This isn’t the first incident for Reese’s. Earlier this year a girl found that her Reese’s was filled with maggots.