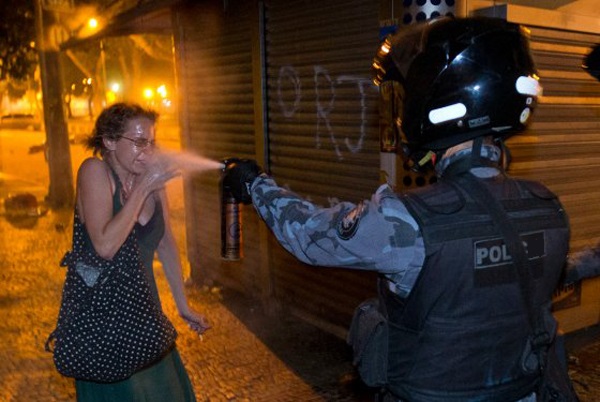 Woman Gets Pepper Sprayed, Rubs It Right Back Into Officer’s Eyes.

Here’s something you don’t hear about everyday. A cop, who saw two women in an altercation, came over to try and intervene.

Little did he know what he was about to get himself into. The officer ended up trying to pepper spray one of the women and ended up getting the pepper spray rubbed right back into his own eyes.

The Florida sheriff’s deputy was trying to break up this altercation that was getting a little out of hand.

He attempted to arrest 33-year-old Sara Henderson on charges of disorderly intoxication, but she decided that she was going to resist arrest and fight back.

In the process of fighting back she knocked his microphone off his shoulder so he couldn’t call for back up. That’s when the officer pulled out his pepper spray and sprayed it at Henderson.

To his surprise, she rubbed the stuff right back into his own eyes. I guess you shouldn’t use the stuff if the person your using it on can reach you..

Later on at the hospital she had told the employees that she had done it on purpose and now in addition to being charged with disorderly intoxication, she is also being charged with battery of a police officer, depriving an officer of his means of communication and resisting arrest with violence.