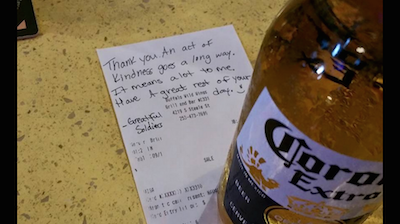 Woman Orders Beer For Fallen Soldier, What This Restaurant Does In Response Is AWESOME!

A woman who lost her brother who died in Iraq, went to the Buffalo Wild Wings in Washington to have a meal.

She asked bartender Brian Avey if she could have two beers, one Corona and one Blue Moon. Avey told the woman that the restaurant policy was only to serve customers one drink at a time, but she had a heartbreaking response.

“She said the corona was for her brother who died in Iraq and I won’t be drinking it,” he wrote on Facebook. “It just sat next to her at an empty seat her entire lunch.”

The bartender didn’t speak much with the woman after that, but he and his manager agreed the Corona should be on the house. “He told her Buffalo Wild Wings took care of the Corona in honor of her brother,” Nicole, the manager of the restaurant told BuzzFeed news.

When she signed her bill, the woman wrote Avey a note which he shared on his Facebook.

“Thank you. An act of kindness goes a long way. It means a lot to me. Have a great rest of your day,” she wrote.

After the woman left, Avey didn’t feel right just throwing the beer out. So he approached his manager and asked if he could place it on display. The manager agreed, saying, “Just do me a favor, put a fresh lime in it every morning.” 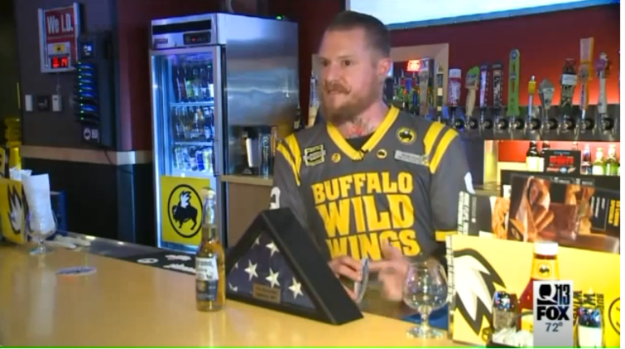 A Military Woman came into my work today for Lunch, she ordered a Blue Moon and a Corona, I told her she could only do…