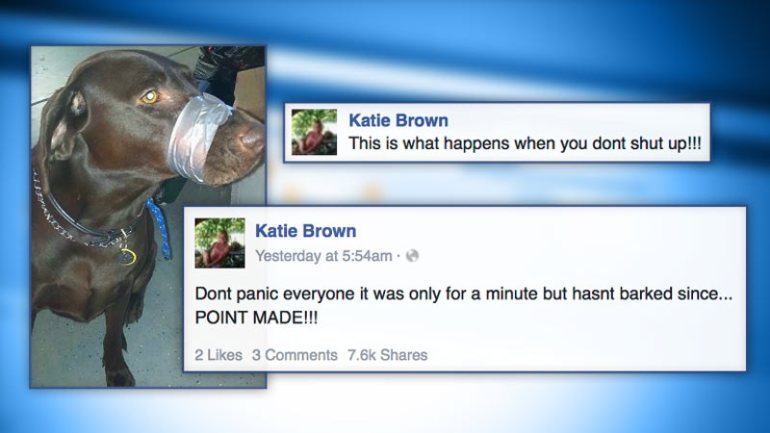 Police have arrested a woman who allegedly posted a photo of the dog with its mouth taped shut on Facebook – a picture that sparked outrage over social media.

On Monday, police in Cary, North Carolina issued a news release that they had arrested Katherine Lemansky, 45, who had a Facebook page with the name ‘Katie Brown’.

Lemansky A=allegedly posted the photo on Friday with a caption that read, “This is what happens when you don’t shut up!!!” Since then, authorities in 2 states say that they’ve been flooded with calls about her.

According to Fox 8 in North Carolina, her Facebook page suggested she may live in South Daytona, Florida, or Avon, Connecticut, and police in both cities say their phones have been ringing off the hook.

Cary police said Lemansky had been staying in Cary with the dog.

The photo had been shared nearly 400,000 times as of Saturday night. people from around the world shared the photo, calling for action to be taken against the dog’s owner.

Brown wrote a second message on Facebook saying, “Don’t panic everyone it was only for a minute but hasn’t barked since…. POINT MADE!!!”

Cary police Capt. Randall Rhyne released this statement: “Taping the dogs mouth shut was a terrible decision on Ms. Lemansky’s part, and charging her with animal cruelty under North Carolina law was the right thing to do. At the same time, it’s important to also note that our animal control officers who physically examined both Brown and her littermate found the dogs to be very well cared for, which is why we did not and could not remove them from the owner. The dogs are current on their shots, spayed, and microchipped. They are clean and well nourished and appear to be comfortable in their surroundings. And there were no signs of injury to Brown’s muzzle, not even detectable hair loss.”