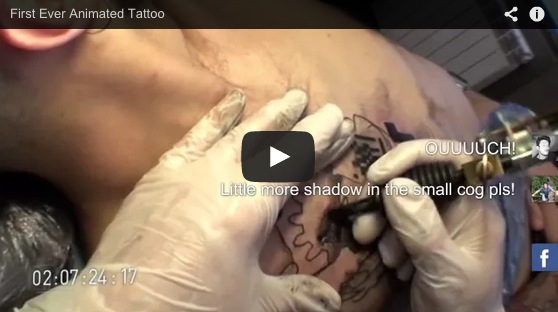 The World’s First Animated Tattoo, Would You Get One?

The video below shows the first ever animated tattoo. Yeah you read that right, animated tattoo! The artist, Karl Marc, aka K.A.R.L., works at Mystery Tattoo Club in Paris, France.

He decided to incorporate a matrix code into a chest tattoo that, when scanned, presents an animation of the tattoo itself.

This blending of physical tattooing and internet animation is the first of it’s kind. The idea was a part of the Ballantine’s Human API Project and their “leave an impression” campaign.

Here’s a quote off of their website: “Ballantine’s believe that life fulfillment doesn’t come from material goods. We believe it’s about how express yourself. The impression you leave on everything you do, anyone you meet.”

At the end of the video you can see the code work as intended and the animation pop up on the smart phone’s screen.

Now some people have raised concerns about hygiene when K.A.R.L. places the phone on the newly tattooed chest. T

his was Ballantine’s response: “It’s been cut in the edited video, but during the actual session, Karl cleaned and sterilized thoroughly both Marco’s chest and the device before triggering the code. […] The last thing we (and surely Karl) want to do is to promote unprofessional tattooing.”

Check out the video below, Share, and let us know what you think. Would you get something like this tattooed on your body?