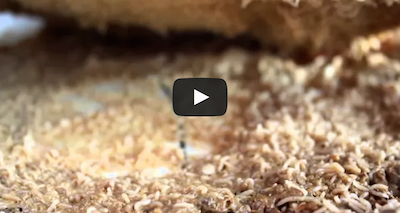 Derived from pecorino, the larvae of the Piophila casei (cheese fly) produce an advanced level of fermentation.

A decomposition of the cheese, which softens it and also creates a liquid called lagrima.

Technically, the maggots eat the cheese, break down the fats, and then defecate it.

When the cheese fly is introduced, a piece of the rind is removed so the cheese fly can lay its eggs. After several weeks, the fats are broken down, rendering the cheese soft and creamy.

The female larvae can lay 500 eggs at one time, so the fully broken down Casu Marzu has thousands of maggots inside.

In the video below, this is just what the underside of the cheese looks like. The larvae can jump up to 6 inches, so diners traditionally hold their hands over the cheese while eating.