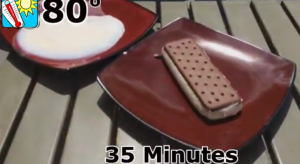 When Dan Collins of KIKN 100.5 in Sioux Falls heard that a Walmart ice cream sandwich would not melt in the sun, he decided to put it to the test.

It was only at the 60 minute mark, that the ice cream sandwich began to emit a clear runny substance. However, it was definitely not ice cream.

Next to it, he set out a scoop of Blue Bunny real ice cream which melted in mere minutes.

Would it be safe to say that Walmart uses the same practice for their ice cream that McDonald’s uses in their “Shakes”?

It seems that Walmart is following in the footsteps of their billion-dollar corporate friends, while risking your health to fill their pockets.

This will be the first generation in many years who’s life expectancy will not surpass the previous generation. I think many of us are beginning to understand why.