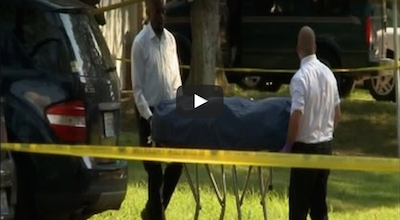 An 11-year-old St. Louis area boy left alone at home with his four-year-old sister, staved off several home invasion attempts before finally shooting and killing a 16-year-old intruder, according to police.

At least one neighbor, however, offered a different account of the shooting, telling CNN affiliate KMOV that the boys were arguing on the front porch before the younger child pulled out a gun and shot the teenager.

The incident occurred Thursday afternoon in north St. Louis County. Police called to the home discovered the teenager’s body lying in the front of the home. The teenager had been shot in the head by the 11-year-old while breaking into the home, according to police.

St. Louis County Police Sgt. Brian Schellman said it was the third time that the 16-year-old had attempted to break into the house Thursday. Neither sibling was hurt. One woman described by KMOV as a neighbor, questioned the account. The woman, whose name was not given by the station, said the 16-year-old didn’t enter the house. “They were just arguing loud, you know, back and forth,” the woman said. “He was always just sitting right there on the porch. He never did once go inside the house.”

It wasn’t immediately known Thursday why the two were left alone in the first place or why the 11-year-old had access to the firearm. Police said the mother, whose name has not been released, was cooperating with the investigation. It was reported that the mother purchased a handgun because of prior break-in attempts.