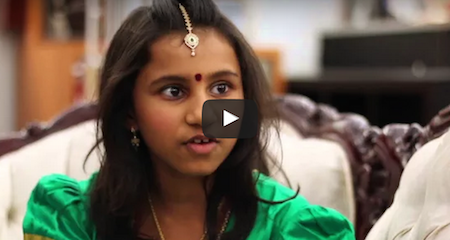 This nine-year-old, Yogamaatha from India, astonished onlookers in the United States recently as she wore a blindfold and proceeded to read sentences from a piece of paper in front of her.

How you ask? Yogamaatha Claims that she attended a course at Gurukul, India, where she was initiated by a guru and now possesses the unique ability to see with her third eye.

She states that this mystical power is a “learned ability,” opposing those who believe that gifts like these are only for the chosen few. Not only can she read blindfolded, this nine-year-old states that she can also write a bicycle through traffic and dodge cars.

The video below shows Yogamaatha at Capitol Hill, where her eyes are covered as she has tested.