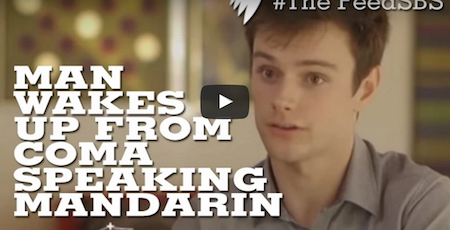 English speaking Ben McMahon, 22, says he woke up and saw a nurse who looked Asian standing by his bed and said to her, “excuse me nurse, I feel really sore here” in Chinese.

He then asked the nurse for a piece of paper and pen and he wrote on it in Mandarin: “I love my mom, I love my dad, I will recover.”

His newfound language skills baffled his doctors and family. Despite taking Mandarin at school, then had never been fluent in the language. “I wasn’t consciously thinking I was speaking Mandarin, it was what just came out and it was what was most natural to me,” he said.

It took been two or three more days to recall how to speak English. Since then, Ben’s language skills have opened up new opportunities for him including leading Chinese tours of his hometown and even hosting a Mandarin television program. Now the Melbourne man has moved to Shanghai to study commerce at university. He said he was fortunate to be alive and to be able to speak a second language.