Bear-Hugging Jesus – Probably The Craziest Interview FOX Has Ever Done. 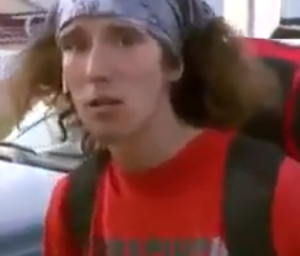 A homeless man named Kai was hailed a hero after an attack last year. This hatchet wielding hitchhiker saved a woman from the clutches of a bear hugging racist who claimed to be the reincarnation of Jesus Christ.

Kai was hitchhiking when he was picked up by a man who then shortly after, ran his car into a black Pacific Gas and Electric worker in West Fresno, pinning him to his utility truck.

The unidentified man made things much worse by exiting his vehicle and physically pulling on the injured worker.

Tonya Baker, an eyewitness, saw the man walk back to his car and tried to stop him.

He then turned around and tried to smother her with a bear hug. “He just kept saying he’s Jesus Christ and he’s going to save all of us,” she told the local Fox affiliate KMPH. “But we have to get these n**gers ( referring to black people) off the earth.”

Kai, who was hitching a ride with the racist Jesus Christ wannabe jumped out of the truck with a hatchet, beating the driver and saving Baker.

“Like a guy that big can snap a woman’s neck like a pencil stick,” Kai recalled thinking at the time. “So I f*cking ran up behind him with a hatchet – smash, smash, suhhh-mash!”

The PG&G worker was rushed to the hospital with two broken legs. The driver was also removed from the scene with non-life-threatening injuries. He was then taken into police custody.

Kai the hitchhiker became somewhat of a Internet sensation following the interview drama.

I’m pretty sure FOX has never had an interview like this before. Many have seen it, but for those who have not, check out the video below.

Even if you have seen it, it’s definitely worth watching again!