Canadian: ‘You Americans Have No Idea How Good You Have It With Obama’.

Just after the midterm elections in the United States, the Detroit Free Press published Canadian Richard Brunt’s open letter to American voters. In his letter titled, “You Americans have no idea just how good you have it with Obama,” Brunt reminded Americans where we were prior to Obama coming into office.

Many of us Canadians are confused by the US midterm election. Consider, right now in America, corporate profits are at record highs, the countries adding 200,000 jobs per month, unemployment is below 6%, US gross national product growth is the best of the Organization for Economic Cooperation and Development (OECD) countries.

The dollar is at its strongest levels in years, the stock market is near record highs, gasoline prices are falling, there’s no inflation, interest rates are the lowest in 30 years, US oil imports are declining, US oil production is rapidly increasing, the deficit is rapidly declining, and the wealthy are still making astonishing amounts of money.

America is leading the world once again and respected internationally – in sharp contrast to the Bush years. Obama brought soldiers home from Iraq and killed Osama bin Laden.

So, Americans vote for the party that got you into the mess that Obama just dug you out of? This defies reason. When you are done with Obama, could you send him our way? 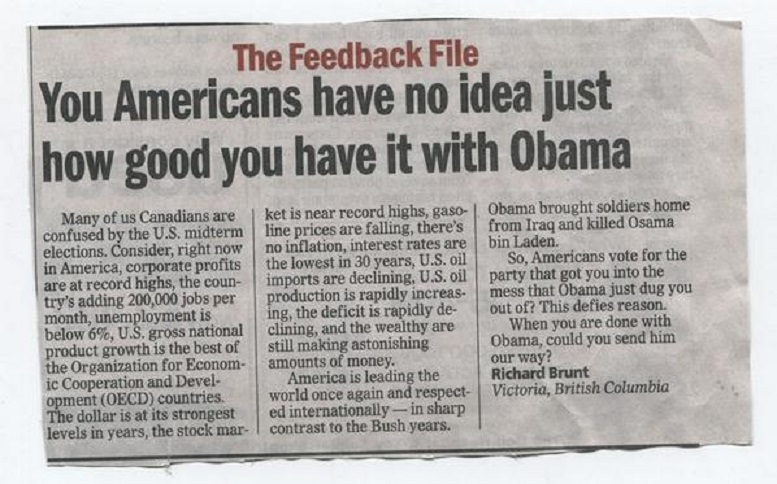