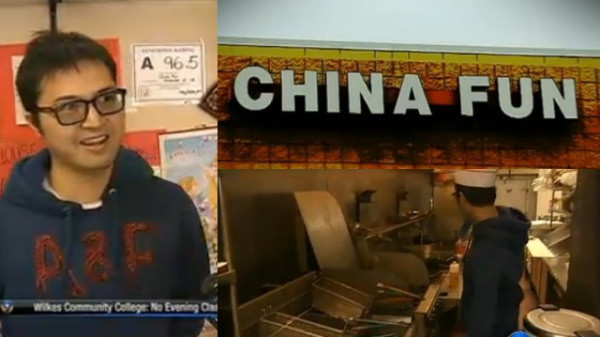 The Cabarrus County Health Department In North Carolina is investigating a Chinese restaurant after a woman saw someone loading roadkill into the back of the truck and bringing it into the restaurant.

“I just couldn’t believe what I was seeing,” said the unidentified woman, who was shocked when she saw that the dead deer was being loaded into the back of the truck.

She said she was even more surprised when she saw the truck drive behind the restaurant China Fun.

“They were backed up to the restaurant door with that dead deer in that car they used for delivery,” she said. Police then called the health department, who investigated the matter.

“We went there and found, indeed, they had slaughtered a deer, and were cutting up a dead deer in the back of the parking lot and had already brought parts inside, into the sink,” County health director William Pilkington said.

However, the owner insists that he was not planning to serve the deer to customers but that, instead, he wanted to eat the meat himself. “I asked somebody if I could eat deer from the side of the road. He said okay,” owner Sunny Chen said. “But maybe it’s not okay to bring it to the restaurant, so that’s my mistake.”

Pilkington Said that the restaurant remained open because there was no cross-contamination from the roadkill, as Chen did not intend to give the meat to customers.

Do you believe that he was going to feed roadkill to his customers? Or do you believe his story? Comment and share with your friends!