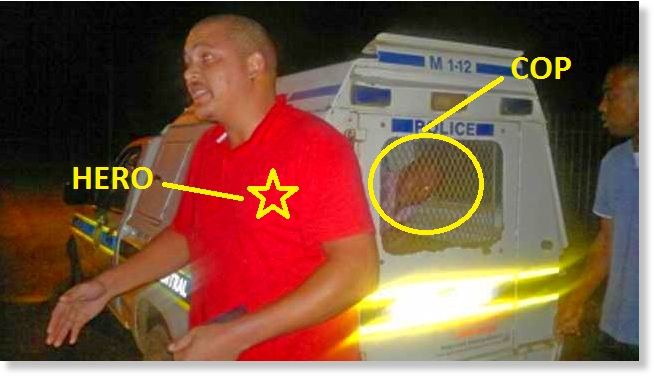 Citizen Pulls Over Drunk Cop, Locks Him In His Own Cruiser.

Russell George, a concerned citizen, was driving down Scott Street on a Sunday night. He noticed a police van swerving and driving recklessly into oncoming traffic.

George told The Witness, “At this point I was concerned about the safety of other road users. He suddenly jammed on his brakes and came to a complete stop. I got out of my car and went towards him and asked him if he knew what he was doing. He started his car and carried on driving.”

The officer quickly took off down the road and continued his reckless driving. The officer turned down Logan Road and came to a stop at an intersection. George called the police and they told him they would be there shortly.

“After five minutes, no one arrived. So I jumped out of my car and approached the driver side and asked him to come out. He looked at me and I could smell that he had been drinking,” George explained. “I asked him again, and he refused. Then I grabbed his keys, pulled him out and locked him in the back of his own van.”

The van was a complete wreck. He obviously had hit a few things during his evening cruise. George said after he put the officer in the back of the van the officer began crying. I guess he knew he was busted.