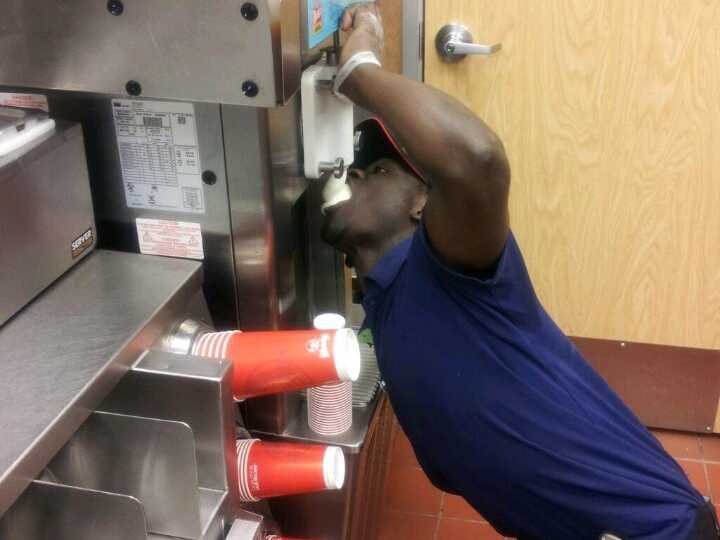 Confessions Of Fast Food Employees – WARNING This May Disgust You.

The following question was posted on REDDIT.COM: “fast food workers of Reddit, what should we NOT order at your restaurant? Why?

#1.  Anything McCafé at McDonald’s – “I work for McDonald’s and make sure everyone that matters to me never orders anything that comes out of the McCafé machine as these are routinely neglected, in practically all of the McDonald’s. Not only is the staff not properly trained in its cleaning and maintenance, in most every McDonald’s I’ve had experience with, the managers in charge of training them don’t know anything either. All the McCafé beverages run through a horrifically dirty machine. Were talking 5+ inches of uncleaned, liquid bullsh*t making up its inside parts.”

#2. Do Not Order Hot Dogs At Baseball Games. PERIOD! – “I used to work in a baseball park concession stand. The short answer is not to order anything, but if you absolutely have to buy something, don’t buy the hot dogs. They made it out of the package okay, and might even have been edible after we finished grilling them. Then they went into the water. We kept three pans of water at the back of the grill that held the hot dogs. Any hot dog left at the end of the day went back into the fridge, and came out again the next day. Me and the other cook put our foot down on throwing out the water and old hot dogs after two full days, but the management didn’t want to let us.”

#3. Wendy’s Chili – “I used to work at Wendy’s. The meat used in the chili, yeah that comes from the meat on the grill top that expires and dries up. That’s put into a warming drawer until you have enough for a batch of chili, which we first freeze and then thaw the next day. Also if the chili sitting in the warmer doesn’t sell fast enough we just added hot water to it to mix it up.”

#4. Movie Theater Popcorn – “I worked at a theater, don’t get popcorn from the first showing. That’s all just last nights popcorn put into giant garbage bags and then reheated in the warmers in the morning. Oh yeah and remember that sticky floor in the aisle of the theater? Well what do you think would happen if you had that at your house. Yes that’s how you get ants and cockroaches and everything else. Plus it’s in the dark most of the time. It’s like a bug buffet once the lights go out and the movie starts.”

#5. Always Ask For Fresh Chicken Nuggets At McDonald’s, If  You Dare Eat Them Anyway – “I used to work at McDonald’s. If you order, especially chicken nuggets, ask for them fresh. Otherwise they have been just sitting in their container in the heat. They have a timer, but 9 out of 10 times when the timer goes off, people just reset the timer instead of making new ones. This could go on until the Nuggets are sold.”

#6. BBQ Chicken Sandwiches At KFC – “I worked for KFC for 4 years. The BBQ chicken sandwich is actually made from chicken too old and stale to give to the homeless shelters, so they soak it in barbecue sauce until it can be pulled and then they keep it on the heater for one month.”

#7. Gas Station Slurpees – “I worked at a gas station for many years. The amount of mold on the slurpee machines in the gas stations would crush her childhood to a pulp.”