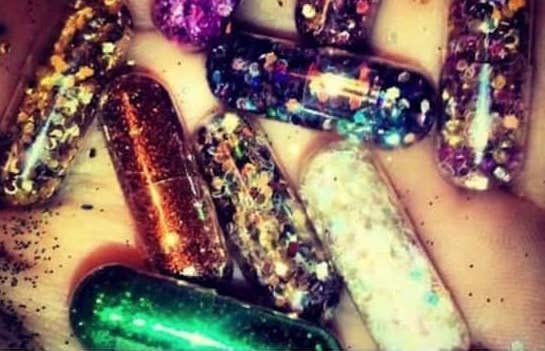 Have you ever thought of taking a sparkling dump? Sounds crazy, right? Well, there are people out there who are going to the next level of making their poop sparkle by consuming glitter pills.

It all started when an Ohio-based company started selling glitter pills which supposedly, start making your poop sparkle and glittery!

What’s a glitter pill? In one sense, it’s exactly what it sounds like: a transparent gelatin capsule filled with glitter. What’s the point of a glitter pill? We have no idea. As far as most of the Internet is concerned, glitter pills are nothing more than a crappy punchline—and we do mean “crappy” both figuratively and literally. If you take one, rumor holds, you’ll poop glitter.

But here’s the problem: They aren’t technically edible. As redditor ultradip asks, “What else are they for, if they’re not meant to be eaten?”

The pills come with a warning stating that they are for decoration only and not for human consumption, yet, apparently people are eating them anyway for their glittery results.

According to research, it is believed that glitter is not recommended for consumption as there are chances that it would get lodged in the digestive system, and it can even alter hormone production.

Apart from this, it would also increase your risks of cancer. The Impact Of Glitter On The Environment Environmentalists around the world insist that humans need to reduce the use of glitter as it is glutting our oceans at the rate of eight million tons every single day! This is the equivalent of one garbage truck that is full of toxic plastic dumped per minute.

The marine researchers reveal that the excess glitter is literally killing marine life. The different molluscs, decapods, echinoderms, fish, seabirds and whales are consuming these microplastics which are derived from glitter.

This is causing a lot of unwanted health issues among the animals as well. Even though there are so many health issues, it is believed that now the world is ready to taste some edible glitter! Be it in the form of glittery coffee, or a Turkish dish, there are a lot of food items which have glitter in them!

For the companies that use edible glitters, they are required by law to include a list of ingredients on their label that contain items like sugar, acacia, maltodextrin, cornstarch and colour additives. So this consumption is believed to be safe.

For every 100 people on the Internet jokingly claiming they’ll try something, there is inevitably one guy who really means it. When this person does swallow a handful of capsules filled with glitter, what can he or she expect?

We haven’t seen any visual evidence of glittery human feces, which is probably for the best. A compelling photo of questionable provenance posted on Reddit in 2012 depicts an undeniably sparkly pile of poop that purportedly came about after someone’s dog ate glitter. (In general, the canine consumption and subsequent defecation of glitter appears to be a fairly common topic of discussion among dog owners online.)

Emily of Eat Glitter first designed her line of glitter pills as an art project in 2011, and believes she was the first to sell them online. She says shoppers routinely inquire as to whether her wares will make them “shit sparkles.” In her experience, they probably won’t.

“I have had customers ask for a refund because this did not happen,” she tells us. “I can’t honor these requests because I make no claims they will, and I explicitly advise against consuming them.”

Your mileage may vary. “Supposedly, if you eat enough of them, it should work,” she says.

Eat Glitter offers glitter pills in a variety of colors, including “slime” and “unicorn food.” A pack of two sells for $7. EATGLITTER.COM

The scientific literature has yet to address the phenomenon of glitter poop. We’ve discovered firsthand that it’s a subject on which the medical community at large is understandably reluctant to comment.

“I don’t think [eating glitter] is medically advisable,” says David Cromwell, an assistant professor of medicine at Johns Hopkins, in an email. “Nor do I think there’s any evidence that it’s ill-advised.”

All the pills we’ve encountered online are reportedly manufactured with nontoxic glitter, but it’s important to note that “edible” and “nontoxic” aren’t the same thing. Technically, “edible” means your body will digest the substance normally, whereas “nontoxic” means it isn’t poisonous. (Confusion about this distinction caused a minor scandal, Glittergate, on The Great British Bakeoff in 2012.)

For example, Disco Dust—a finely ground plastic intended for crafting and “display cakes”—is nontoxic, but inedible. “These dusts are not FDA approved,” reads boldface text on the manufacturer’s site. “They are not a food product and should not be considered as such.” There’s been minimal research as to the health effects of eating “glitter-sized fragments” of nontoxic products like cake decorations.

Simply put, having a taste of the stuff won’t kill you, but no one’s suggesting you casually snack on it, either. It’s also unclear exactly how much glitter you’d need to eat to produce a turd worthy of Tinkerbell—just as it’s equally unclear how much you’d need to eat to disrupt the comfortable, optimal functioning of your bowels.

If you’re dead set on swallowing some shimmery pills, there are edible, starch-based glitter products on the market, like Wilton Cake Sparkles. That said, it seems far less likely that they’d produce a noticeable glimmer in your bowel movements.

Your body will digest edible glitter as it would normal food, whereas inedible glitter by definition passes through your system in something close to its original form. Tough shit, huh?