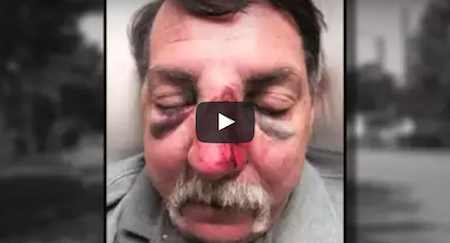 Janet and Donald Akers were heading to Jefferson Barracks on Mother’s Day to place flowers on Janet’s mother’s grave. They never made it.

As he exited the freeway, Janet Akers honked her horn when a black Dodge Ram was heading into her lane. She explains, “To let him know, hey, you’re coming over to hit us, and then he backed down, got behind us, and honked and honked and honked, all the way through the intersection.”

Akers gestured to the driver of the truck to pull over in this parking lot, so she could explain why she honked in the first place. then, she says, “His wife jumped out of the truck. She came over, started yelling at me.” At the same time, Janet Akers recalls the driver got out of his truck and approached their vehicle, armed with a gun.

Donald Akers said, “He held the gun first, I didn’t know if he was going to shoot us or what. But instead, he hit me right across the nose with it. Broke my nose, my sinus cavities, broke my teeth.” Once that happened, Janet Akers admitted she fought back. By standards broke up the fight.

Then, it gets worse. Being that he is a police officer, they decided to protect their own. Listen to the rest of the story in the video below.