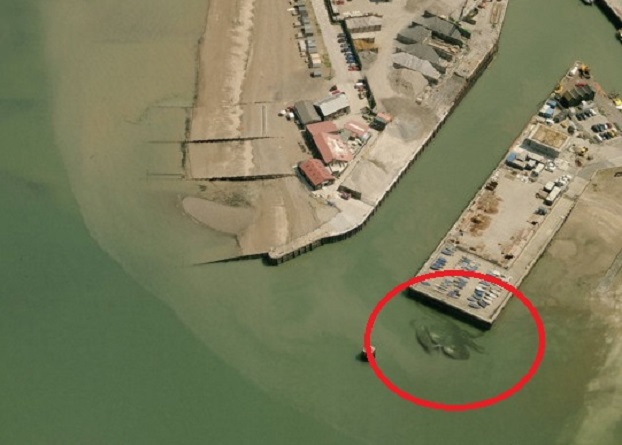 This photo of a giant crab was featured on the website ‘Weird Whistable’ and has people of this England community startled.

The photo depicts what appears to be a 50 foot crab hangout near a wharf in Kent, England.

Quinton Winter, who runs the website Weird Whistable, told the Daily Express that he’d spotted a giant crab in the mouth of Kent harbor while on vacation with his son. “It had glazed blank eyes on stalks, swiveling wildly and it clearly was a massive crab with crushing claws,” he said.

Winter asks the question on his website, “Does this satellite photo of the harbor reveal a giant crab or unusual sand formation?”

The idea of a giant ‘Crabzilla’ would be very exciting, experts say. Experts also say that they are not sure about the currents around the harbor or what sort of shapes they might produce in the sand. Anything is possible!

‘Crabzilla’ occasionally still lurks near the Kent harbor and crowds are forming there on a regular basis in hopes of catching this unusual animal.