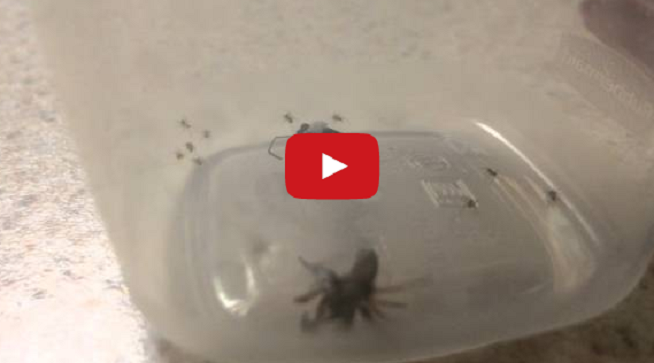 Spider Explodes With Babies When Attacked By Spider.

YouTube user Mathew Duncan had caught 3 spiders in his house and put them in a plastic container.

“I had no idea one had tons of babies on its back,” Duncan said. “So I’m glad I caught it and fed it to the other one before I had 20 to 30 spiders disbursed within my home. I just wish I had also filmed the spider munching all the babies.”

The spiders were identified as a white tailed spider, that was the attacking spider. The other was a wolf spider, this was the one that was pregnant and attacked.

“Female members of the Wolf spider have their egg sac attached to their spinnerets,” Dr. Leonard Vincent, an arachnid expert at Fullerton College in California told The Huffington Post. “Where the adult female goes, so does the egg sac.”

Once hatched, the spiderlings crawl onto their mother’s back and stay there for a week or two before becoming independent, unless another spider attacks.

So if you have a spider phobia, I suggest you do not watch this video. It will give you the creepy crawlies.

If you don’t mind spiders, definitely check out the video below.