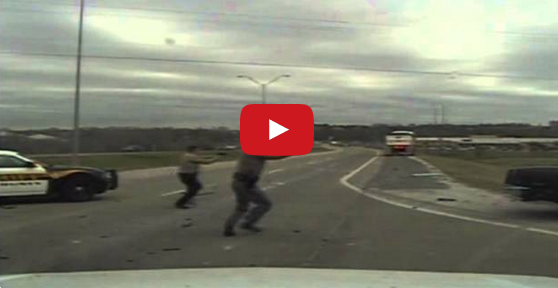 Dash Cam Shows Shooting, What Happens At the End Is Instant Karma.

Warning, this video below may be disturbing to some viewers.

The Colorado District Attorneys office released a dash cam video of an officer being shot, which eventually ended in a deadly car chase.

The suspect, Evan Ebel, wounded a Texas sheriff’s deputy then took off in his car and began the 100 mph chase. Ebel can be seen weaving in and out of traffic, but when he came to the intersection, his car was ripped into pieces by a semi truck.

He was ultimately shot to death by the police. The suspect, Evan Ebel, was a parolee suspected in two slayings.