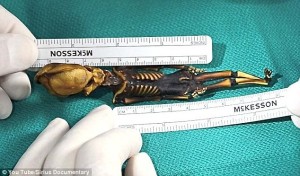 Is This Human Or An Alien Cover Up? 10 years ago, in Chile, bones of a 6 inch skeleton with a large head were found. There was speculation that it may be an Atacama humaniod, nicknamed Ata, or an aborted fetus, a monkey or even an alien. Now scientists at Stanford University have carried out DNA tests to find out exactly what it is. At first it was hailed as proof of alien life, a mummified visitor from another planet. After six months of research by leading scientists at Stanford University, the humanoid remains a profound mystery. The DNA tests came back positive for human remains. “We traveled to Barcelona Spain in late September 2012 to obtain detailed x-rays, CAT scans and take genetic samples for testing at Stanford University. We obtained excellent DNA material by surgically dissecting the distal ends of two right anterior ribs on the humanoid, ” said physician and disclosure project founder Dr. Steven Greer. “These clearly contained bone marrow material, as was seen on the dissecting microscope that was brought in for the procedure.” There were some very strange things about this creature. It had hard teeth, a bulging head with an additional odd bulge on the top. Its body was scaly and of a dark color and unlike humans, it had nine ribs. 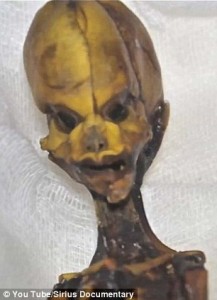 In this documentary Sirius, they took DNA samples from bone marrow extracted from the specimen, and it was analyzed by scientists at this prestigious American University. They concluded that it was an “interesting mutation” of a male human that had survived post-birth for about 6 to 8 years. “I can say with absolute certainty that it is not a monkey. It is human, closer to humans and chimpanzees. It lived up to the age of 6 to 8 years,” said Gary Nolan, director of stem cell biology at Stanford University’s school of medicine in California “Obviously, it was breathing, it was eating, it was metabolizing. It calls into question how big the thing might have been when it was born.” 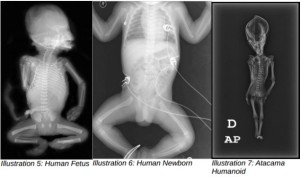 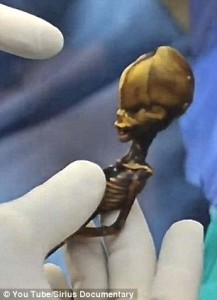 Okay, Stanford University made this documentary and determined this creature was human. Now, I’m not too big on conspiracy theories, but I’m going to throw one out there. So this little human was found 10 years ago and made public. If aliens do exist, do you think that our government is going to want YOU to know about this? Or are they going to line the pockets of a prestigious university to do a documentary and DNA testing to tell the whole world, “No, this is not an alien. Sure it looks like one, we’ve never seen anything like this before, but we promise you it is human.”  Seriously? Look at these photos! So we should just forget what we see, and believe what they say. I guess we can all come to our own conclusions.